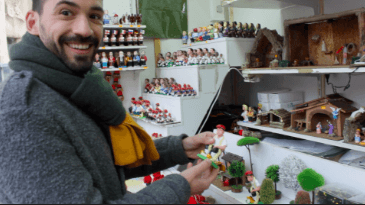 There is usually not a lot of snow in Barcelona (if any) but the Christmas spirit is very present through the popular local traditions such as markets, parades, gastronomy and many more which we will try to explain briefly.

One of the most typical things is the Christmas markets set up all around town. From the more modern in galleries and other spaces focused on art, design, and fashion, to the most traditional like Fira de Santa Lucia in front of the Cathedral in the Gothic Quarter or Feria de Navidad en la Sagrada Familia. Here you will find your tree and plenty of decorations some of them unique to this region of the world.

Among those decorations there are a couple that will certainly get your attention and we always have some difficulties to explain to our guests like “El Caganer”. The name literally means “the crapper” which doesn’t come as a surprise since this little figurines are in a sitting position with their pants down. While this may be shocking or even controversial for other people and cultures, in places like Catalonia, Andorra, Valencia or Southern France, “caganers” have been decorating nativity scenes in most homes since the 18th century. By making this symbolic “deposit” people believed they were fertilising the earth and today placing the figurine is suppose to bring good luck and joy. These days it´s also very common to see “caganers” of famous people whether they are local or international politicians, football players or other celebrities.

Another very important aspect of Christmas in Barcelona and Catalonia is gastronomy. As. You well know food is a big part of our daily life and the Holiday Season is not an exception as it has it´s specialities. You probably heard of the “turron” – a nougat made of egg-white, sugar, honey, almonds and it´s modern variations and interpretations (coconut, chocolate, truffles…). Although the “turron” is a must in almost every Spanish household, other meals like “canelones” (traditionally stuffed with leftovers) or “sopa de galets” (soup with shell shaped pasta) are specific for Catalonia.

Last but least – who and when delivers gifts and presents? There are two approaches on this matter that are widely accepted in Spain – either presents are brought by Santa Claus on the evening of the 24th or by the Three Kings early on the 6th of January. Speaking of the Three Kings, if you are in Barcelona this day make sure you don’t miss the parade “Cabalgata de Reyes”. The Kings arrive in spectacular fashion by sailboat and after disembarking they go thru many of the streets of the city spreading joy and candies.